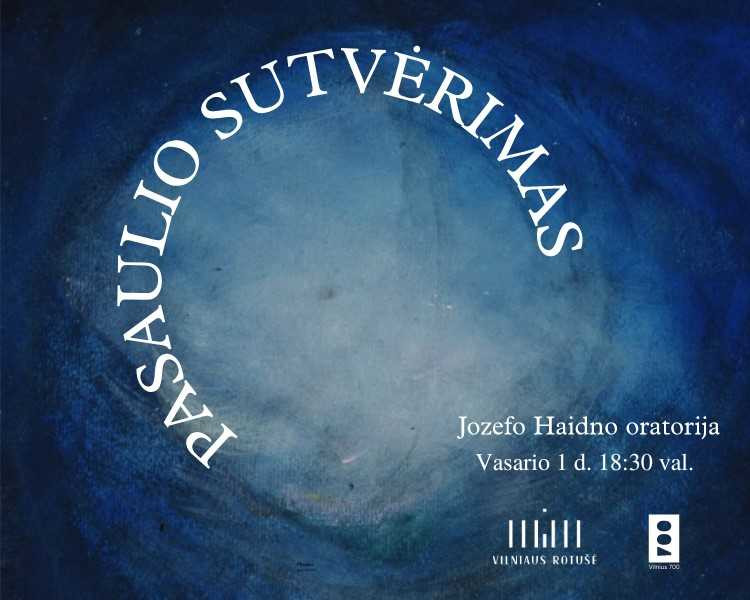 On 1 February at 6.30 pm we invite you to an exclusive PREMIERE dedicated to the 700th anniversary of Vilnius – Joseph Haydn’s oratorio THE CREATION.

We hope that Haydn’s work, which was performed more than 200 years ago at Vilnius Town Hall and has been reborn again, will become a meaningful tradition and will be performed at the Town Hall every year on the occasion of Vilnius’ birthday!

The three-movement oratorio THE CREATION is one of the first works of the oratorio genre performed in Lithuania.

The first performance of Haydn’s oratorio “The Creation of the World” was organised in 1809 by J. Frank, a German doctor of medicine, who has made a great contribution to the social life, culture and university of Vilnius. Incidentally, the oratorio was first performed in Vilnius and only later in Vienna. It is interesting to note that in both premieres, the soprano principal part was performed by the celebrity of the time, Dr Frank’s charming wife Christina Gerardi (soprano).

The oratorio The Creation of the World (1798) is based on a biblical story by G. Gerardi. Milton’s poem ‘Paradise Lost’.

Musicologists describe this oratorio, which is as musically mature as Haydn’s famous “Seasons”, as a “sound painting”: the listener can hear the roaring lions and the nightingale, and also feel the mesmerising “enlightenment”, when the Lord says “Let there be light”, and the words are powerfully rendered by the full orchestra and chorus …

During the period of the oratorio’s composition, Mr Haidn was very devout, so he often turned to the Most High to ask for strength and power to complete the work. It is believed that he conceived this idea after hearing Handel’s oratorios during a visit to England. However, the composer leaned over the manuscript, his face illuminated by religiosity, and apparently, unlike the Baroque masters, did not shy away from a gentle smile. “The Creation of the World is as light and “haydn-like” as his other opuses.

The Young Music Choir has sung the choral part of this oratorio in Jerusalem and Tel Aviv with Israel’s finest musical forces, and Haydn’s music is a staple of the repertoire for the St Christopher Chamber Orchestra.

The Vilnius City Municipality Choir Jauna muzika is one of the most prominent and capable vocal ensembles in Lithuania, founded in 1989.Since 1992, the choir’s artistic director and conductor has been the composer Vaclovas Augustinas.

Tickets you can find here.