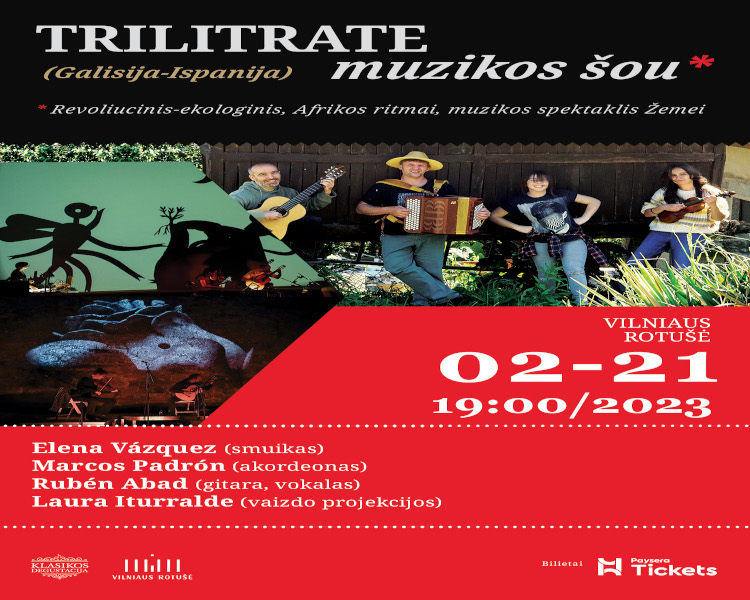 For the first time in Lithuania, a Spanish music group from Galicia „Trilitrate” will perform their interesting musical and visual performances. While the group is playing the music pieces, the visual art designer creates images through the projector directly in front of the viewer’s eyes. Two concerts are planned on February 21 at Vilnius Town Hall and on February 22 at Renavas Manor in Mažeikiai district.

In the group there are three musicians and one visual designer Montse Piñeiro. Elena Vázquez, the violinist, Marcos Padrón, the accordion player, and Rubén Abad, guitarist and vocal, are the members and creators. „Trilitrate“ creates music where all rhythms meet, African, of baroque style, jazz, classic. Visual images complement the music‘ world, talk about the earth and its preservation, for video projections the artist uses plants and other nature‘s materials, each time they are born different, depending on the hall and the audience.

The band’s latest album, Está de Grelo (from Spanish, This is a turnip leaves) on the cover depicts the joyful lovely animated character Turnip. It was created by Montse Piñeiro – a cartoonist, set designer, illustrator, stop-motion animator, awarded for new visual art ideas. Está de Grelo is a Galician expression used when something is really tasty or really good. Turnips are very common in the Galician gastronomy, that’s why on the cover of the cd is a symbol of traditional Galician kitchen, the cd‘s buyer also gets a recipee book.

Está de Grelo contains genuine musical odysseys, that go through Ottoman, Celtic, Romanian, and African folklore, contains the travels as well that lead to a metamorphosis of Baroque music, the impressionism of Ravel, we can hear a wildly innovative harmonic and rhythmic sound. The concerts will feature tracks particularly from this band’s album.