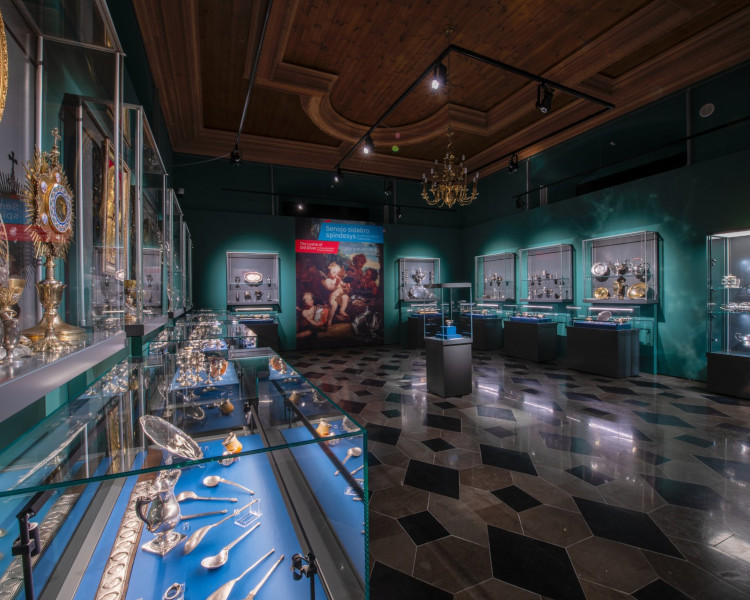 This exhibition presents silver treasures currently in the collections of Vilnius’ collectors. The first part of the exhibition presents the earliest works to have been created in the Grand Duchy of Lithuania in the 17th and 18th centuries. These include 17th-century silver spoons, a signet ring, a belt decorated with silver details, a coffee pot made by Georg Ludwig Kikenap, a goldsmith who worked for Karol Stanisław Radziwiłł in the 18th century, and other works. In addition there are sacred works representing various faiths – painting casings (riza), chalices, a reliquary, a ciborium, a censer for incense, a phylactery and Kiddush goblets. The second and largest part of the exhibition features works by goldsmiths who were active in Vilnius in the 18th–19th centuries. Thanks to the generous collectors, it has been possible to assemble a variety of pieces by famous Vilnius goldsmiths in one place, and thus present a retrospective of their work. Visitors to this exhibition will be able to see works by Thadeus Skędzierski, a goldsmith who worked in Vilnius right at the very end of the Polish-Lithuanian Commonwealth’s existence, and his son Ignacy Skędzierski. Beside their works, also on display are works by a pupil of the latter, Wojciech Jastrzębski, originally from the Voivodeship of Krakow, who worked in Vilnius from 1790 – dishes decorated with silver coins, caddies and other works; also, a bowl created by the goldsmith’s son Jan Jastrzembski, not to mention tableware by other goldsmiths marked with the symbol of Wojciech Jastrzębski’s widow, Dorota Jastrzębska. Some very rare tableware is presented at this exhibition, made by the Berlin-born goldsmith Jacob Gustaw Hahn, who worked in Vilnius from 1790. Incidentally, near his works visitors can see pieces created by his pupils, Ludwig Röhr and Krzysztof Benjamin, one of the most famous 19th-century Vilnius goldsmiths, exceptional for their tasteful form and mastered décor. Vilnius’ goldsmithery tradition continues in the exhibition with tableware, sugar caddies and salt basins by the pupils of Wojciech Jastrzębski and Krzysztof Benjamin Wagner, Leopold Krupiński and Jan Tumiłło-Daniszewski. The exhibition also boasts pieces by other Vilnius goldsmiths including Jakub Preizyg, Antoni Poluta, Friedrich Wilhelm Rykmann, and others.

There are also exceptionally rare examples of work by Kaunas goldsmiths, not to mention some by masters from Königsberg and Klaipėda, on display in the third part of the exhibition. This showcase of silver works ends with treasures associated with the legacy of Lithuania’s magnate families.